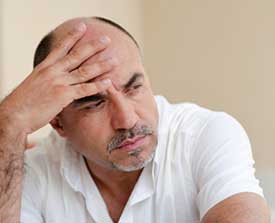 A migraine is beyond a headache . It’s not even in the same ballpark, the same town or same state, a migraine is debilitating. Sufferers typically experience intense pain , sensitivity to light, sounds and experience nausea. The intense pain may last for a few hours or-for those unfortunate enough-a few days, leaving you incapacitated until the attack runs its course.

Often beginning in childhood, adolescences or early adulthood, there are four main stages of a migraine.

Stages of a Migraine

While no two people are alike, a migraine tends to follow a specific course of stages in all those who suffer from this condition.

Predrome; occurring a few days before the attack are several bodily warning signs of an impending migraine.

Aura; typically experienced at the start or right before a migraine, the aura is a group of sensory warning signs.

If symptoms of an aura last past the attack/pain phase of a migraine or span several days, seek immediate medical attention as this can be a sign of an impending stroke .

Attack; lasting several hours to three days or more, this is the migraine itself. Often presenting with:

Postdrome; the final stage of a migraine.

Causes of a Migraine

The exact cause of migraines are yet unknown, but many believe genetics play a role as do serotonin levels. Low serotonin levels can have an effect on triggering cranial pain.

Some common migraine triggers include:

Avoiding these triggers when possible may help prevent the onset of a migraine.

While there is no absolute cure for migraines, many of the symptoms can be treated with holistic options including:

Migraines are immensely painful and can disrupt your day-to-day life, but holistic treatment options do exist to ease your pain.